Here are a few examples of what you may find on your Activity Stream:

1. Form Completion | The Activity Stream is used to monitor live activity. There are a few symbols that you may see popping up:

For each form completed you will see two pop-ups in the Activity stream:

The form will have another symbol following it showing that it's been saved, this will also have the name of who completed the form next to it. This will show whether it's:

2. New Staff Member Added or Resource Completed | The activity stream shows when a new staff member is added or when a Resource has been completed. This shows up as a Green Tick.

3. Blue Note | When a Blue Note is added this is shown up on the activity stream. It shows a blue note on the stream, when you hover over it the contents of the note appears.

5. Back Filling or Over Due Forms | If a form has been filled in late, this shows up in red. The red number shows how late the form was completed. 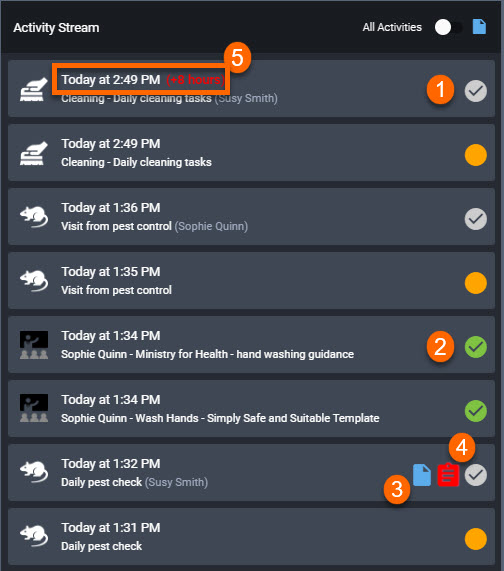